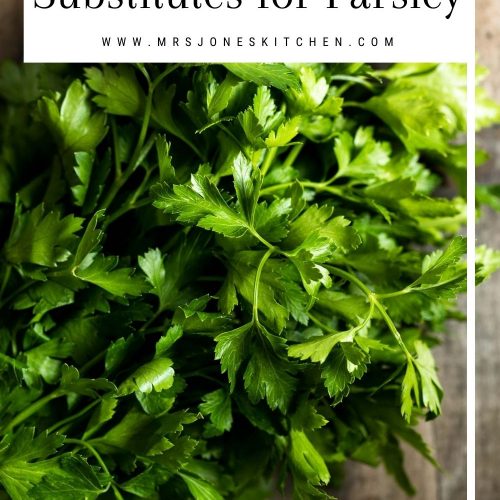 Parsley is a popular herb that is used as a garnish as well as flavouring to dishes. This fresh tasting herb features in many cuisines and enhances ingredients as well as adding freshness and vibrancy to a dish. However, if you don’t have any in the kitchen, or don’t like it, read on for the best substitutes for parsley, and how to use them.

Parsley is native to the central and Eastern Mediterranean (Lebanon, Isreal, Cyprus, Turkey, Southern Italy, Greece, Spain, Morocco and Tunisia), but is now common throughout Europe. It is enjoyed as a herb and as a vegetable. Curley leaf parsley is mainly used as a garnish these days, whereas flat leaf parsley (Italian parsley) which is more robust and stronger in taste, is generally the parsley of choice in cooking. Root parsley is especially common in Eastern, Southern and Central European recipes.

Dark green celery leaves are a delicious and nutritious addition to salads, dressings, stocks and soups. They can be finely chopped to look like parsley. The dark green leaves are more fibrous and do need to be finely chopped, but the young centre leaves can be eaten whole.

Ratio: use the same amount.

Best for: a garnish or use in a salad such as tabbouleh or Kisir.

Chervil belongs to the same family as parsley, but is milder tasting. Often used in French cooking chervil is sometimes called ‘French parsley’. Whilst the leaves aren’t identical to parsley they are similar, especially if chopped.

Coriander and parsley come from the same Apiaceae family. Coriander can look similar to parsley, but is stronger and more pungent in taste.

Best for: Coriander can often replace parsley in Mexican, Thai and Vietnamese recipes and would work in Venezuelan guasacaca. Some regions of Brazil replace parsley with coriander in their recipes, so if you are making a Brazilian recipe coriander may work too. Otherwise, coriander is best left to replacing parsley as a garnish.

Oregano doesn’t look like parsley, other than the fact it is green. And its fragrant note is different. However before you write it off as a an alternative to parsley, oregano goes with many dishes that parsley is commonly used in, such as tomato based sauces (like Basque chicken)

Ratio: oregano is strong tasting, so use less than than the amount of parsley specified in the recipe.

Best for: tomato based dishes and eggs.

Can I use dried parsley as a parsley replacement?

Dried parsley, unlike other dried herbs, is not stronger than fresh parsley and isn’t the best substitute for parsley.

What does parsley do to a dish?

Adding parsley to a dish brightens the flavour. Being mildly bitter it helps balance dishes in addition to adding an extra layer of savoury flavour.

The best Alternatives to Parsley in Specific Dishes:

What to use instead of parsley in Meatballs

Alternative for parsley in garlic bread

Substitute for parsley in pasta

My recipes using parsley and suggested alternatives to parsley:

These examples of how to use parsley substitutes in my recipes will hopefully give you an idea of how to choose the best substitute for parsley in your dish.