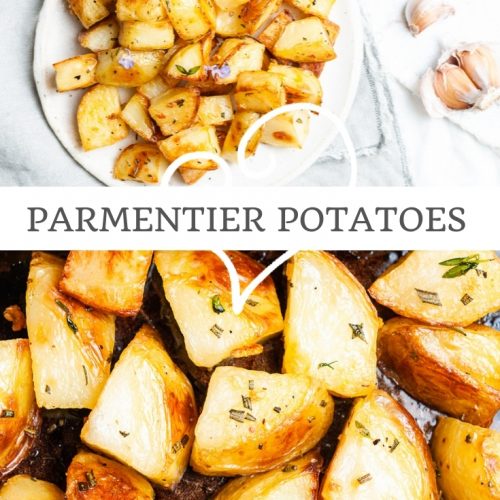 These parmentier potatoes are crunchy, golden roast potatoes baked with garlic, rosemary and thyme. With crispy edges and a soft and fluffy inside, they are an easy side that goes well with so many dishes.

A little bit of history

These delicious cubed roast potatoes are named after a French man called Antoine-Augustin Parmentier. In eighteenth century France potatoes were not popular, and were banned at one point as eating them was rumoured to lead to various illnesses. Parmentier managed to persuade the French that potatoes were actually a delicious – and safe – thing to eat. After eating them in jail, and surviving, Parmentier then set out showing people they were indeed safe to eat. Many potato dishes, including this one, are named after him.

What are Parmentier Potatoes?

They are cubes of potato baked in the oven with garlic and herbs until golden and crisp, the centre of the cubes still being soft and fluffy. Originally the cubes of potatoes were fried in butter, this recipe uses slightly healthier olive oil.

Alongside Duchess potatoes these roast potatoes have to be my favourite way of serving potatoes to the family – and they always get eaten, which is another reason I love them!

How to make Parmentier potatoes

(Full, detailed instructions are in the recipe card at the bottom of the page.)

Is it necessary to boil the potatoes before roasting?

Yes – parboiling the potatoes cooks them enough so the outside will become crisp, and the inside with cook through, and be lovely and soft.

Which potatoes are best for roasting?

Floury potatoes are the best for roasting, as they get crispy on the outside but stay soft and fluffy on the inside. If you’re in the UK: I recommend Maris Piper or King Edward, Australia: Desiree or Dutch Cream, and if you’re in America, I recommend Yukon Gold or Russets.

Can I freeze these potatoes?

I wouldn’t recommend freezing them.

My Tips for success

More delicious side dishes for you

These potatoes are crunchy, golden roast potatoes baked with garlic, rosemary and thyme. Crispy edges and soft and fluffy on the inside, they are an easy side that goes well with so many dishes.
5 from 11 votes
Print Recipe Pin Recipe
Prep Time 10 mins
Cook Time 40 mins
Total Time 50 mins
Course Side Dish
Cuisine French
Servings 4 people
Calories 203 kcal

Estimated costs: Australia $3.82. Per serve = $0.96 UK £0.97. Per serve = £0.25p America – I am yet to calculate the estimated ingredients costs to make this recipe in the US. If you would find it useful please contact me and I’ll get calculating 🙂  Peeled potatoes – You can peel the potatoes before boiling them if you wish. I prefer to keep the skins on – not only for the added nutritional value they provide, but the skins crisp up beautifully too! To reheat leftovers: place leftover roasted potatoes in 200˚C / 180˚C fan /356˚F oven for 15-18 minutes, until heated all the way through. Cooking at 180˚C fan / 200˚C / 356˚F convection / 392˚F: Cook for 30 minutes, then add the garlic and herbs, and return to the oven for a other 15-20 minutes until golden.