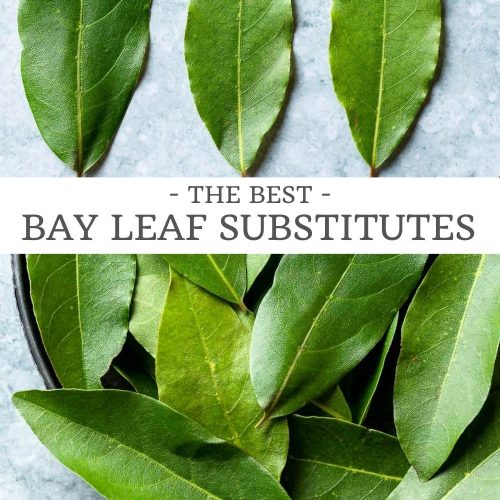 Both fresh and dried, bay leaves add a distinctive flavour to many dishes. But what can you use instead of bay leaves if you don’t have any? Read on for the best substitutes for bay leaves.

What are Bay Leaves?

Bay leaves come from the laurel tree, an evergreen tree from the Mediterranean. Peppery with hints of pine, they are often added to slow-cooked dishes such as soups, stews, sauces and stocks, and then removed before serving. As they are pungent, bay leaves are used sparingly, often 1 or 2 is more than enough in a recipe. There are two main types of bay leaf: Turkish bay (the most common variety) and Californian Bay, which are slightly stronger in taste than Turkish bay leaves and have a minty taste to them. Indian bay is a completely different species (see end of post for alternatives to Indian bay leaves).

Some people question if adding a bay leaf to a dish actually heightens the flavour of the dish. I’m a firm believer that they do, but along the same vein, this means that if you can’t find anything to substitute a bay leaf then you can leave it out altogether. However, if you want to add an alternative to bay leaves in a recipe, here are the best bay leaf substitutes:

Oregano is slightly peppery like bay leaves, and goes really well in tomato rich dishes too. Especially suited to Italian dishes and olive oil based recipes.

Best for: Italian dishes such as pizza sauce or in this pesto lasagne

This slightly sweet and minty earthy Mediterranean herb is less pungent than oregano, and is a delicious addition instead of bay leaves in stews and soup.

Best for: Other European dishes, such as this Basque chicken,

Best for: Soups, meat and lentil ragu and stews.

Juniper berries are fresh and peppery flavoured, with a slightly tart and bitter pine taste that is slightly similar to bay leaves. You don’t need many of these in a dish.

Best for: Pork and cabbage dishes.

This fragrant Mediterranean herb is strong and can impart a pine-like flavour in a dish, like a bay leaf. Rosemary adds a pleasant fragrant undertone, as long as you don’t add too much.

Best for: Mushroom, fish or vegetable based dishes.

Fresh basil tastes too sweet to be used as a bay leaf alternative, but dried basil loses this sweetness and becomes more peppery, and therefore tastes closer to bay leaves and is suitable to replace bay leaves in a recipe.

Best for: Tomato based dishes like savoury mince, sauces and stews, especially Italian and Thai dishes.

Substitute for bay leaf in a stew

Dried oregano or dried thyme are delicious alternatives to bay leaves in a stew, or use a fresh bay leaf or two.

Dried oregano or dried thyme again are great in soups! If you have a tomato based soup such as minestrone, a small sprig of rosemary can be a nice addition.

Can I use bay leaves straight from the tree?

Yes you can use bay leaves straight from the tree, however you may find they taste more bitter compared to dry bay leaves.

How do you store dried bay leaves?

Store dried bay leaves in an air tight container in a cool dark place. If kept correctly, they can be stored for 2 years. They will lose their strength of flavour over time.