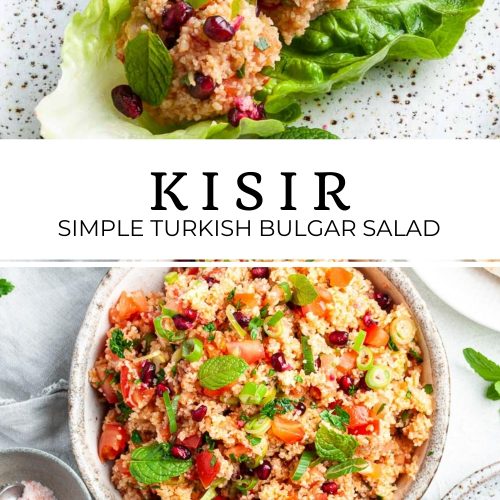 This easy and delicious kisir recipe made with bulgar wheat and fresh tomatoes is a flavour packed salad. Slightly tart from pomegranate molasses, with a freshness from tomatoes, parsley and mint and bursts of pomegranate seeds, it is a delicious side to many dishes as well as being a meal in itself.

Kisir is a simple Turkish bulgar salad. Soaked finely ground bulgar is mixed with tomato paste/puree, pomegranate molasses, olive oil and lemon juice before fresh tomatoes, spring onions, pomegranate seeds and herbs are added. It is similar to tabouleh, but has several differences:

What’s the difference between Kisir & Tabuleh?

The dressing for kisir includes tomato paste and pomegranate molasses rather in addition to lemon juice and olive oil which it the traditional dressing for Tabouleh. Tabouleh, although made with fine bulgar wheat, contains less bulgar to herbs, whereas kisir uses a large proportion of bulgar to vegetables and herbs.

How to make this bulgar wheat salad

What is Bulgar wheat?

Bulgar wheat comes from cracked kernels of wheat that have been parboiled and dried. It is a popular ingredient in Middle Eastern cuisine and is available as fine, coarse, and extra coarse.

How long does the salad keep?

Will keep in the fridge for 2-3 days but it is better served the day after it is made.

Can you freeze this salad?

I do not recommend freezing this salad.

How to eat this Turkish bulgar salad

This easy Turkish bulgar salad makes a delicious side to barbecued meat and vegetables, as well as being a meal in itself
5 from 1 vote
Print Recipe Pin Recipe
Prep Time 10 mins
Cook Time 10 mins
Soaking time for bulgar wheat 20 mins
Course Lunch, Salad, Side Dish
Cuisine Turkish
Servings 8 people – as a side
Calories 220 kcal