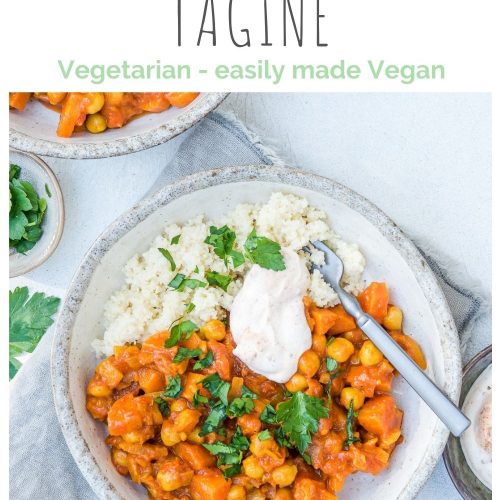 This Moroccan chickpea tagine with apricots and warming spices is a healthy family dinner that can be made ahead and quickly reheated later in the week, making it a great vegetarian meal prep recipe.

Packed with spices, and a hint of sweetness from dried apricots and honey, this vegetarian tagine is a recipe you’ll want to make time and time again.

This gluten free dinner is cooked in one pot – less washing up is always good in my book! It can be made ahead, and with couscous taking so little time to cook, is on the table in 10 minutes, making it a perfect recipe for those busy nights!

It may seem like a long list of ingredients, but most of them are spices. I have used traditional or common spices in tagines: ginger, cinnamon, cumin, turmeric, (saffron is often used too but is a little expensive for our budget right now), and paprika/chilli, which is often added to vegetable tagines such as this one.

This is a kid friendly tagine – the chilli level is mild, the extra kick comes from the optional harissa yogurt: Mix 70g / ¼ cup plain Greek yogurt with 1 teaspoon harissa paste and a pinch of salt.

I am a huge fan of tinned chickpeas, which allow you to make an array of quick and easy vegetarian and vegan dinners; from creamy coconut curry, tomato based Chana Masala, to Indian spiced salads.

What can I serve with chickpea tagine?

Couscous, although I prefer to eat it on its own. If you have meat-eaters in your family, whilst I don’t think you miss the meat, you could serve some of these Moroccan lamb meatballs on the side.

How long can I store the tagine for?

Keep in the fridge in a covered container for 3-4 days.

Can I freeze this tagine?

Yes you can. Cool completely then freeze for up to 2 months.

What does tagine mean?

The word ‘Tagine’ or ‘Tajine’ is the name of the earthenware cooking vessel in which the Moroccan stews are traditionally made. The conical lid captures the steam and it drips down back to the dish, steaming the food and keeping all that moistness and flavour in the food. As I don’t have a tagine, I use a saucepan with a tight fitting lid instead.

Add the tinned chickpeas near the end of cooking to prevent them from becoming mushy.

The fiery harissa yogurt adds a lovely kick to the dish, but leave off when serving to toddlers and kids.

Make it your best tagine recipe:

Estimated costs: Australia $6.74. Per serve = $1.66 (without lemon and parsley $5.23. Per serve $1.31.) UK £2.12 . Per serve = £0.53p (without lemon and parsley $1.42. Per serve £0.36p.) America – I am yet to calculate the estimated ingredients costs to make this recipe in the US. If you would find it useful please let me know and I’ll get calculating 🙂  Fresh ginger: Use 1cm/0.39″ fresh ginger, finely grated and add to the dish with the garlic. Omit the dried ginger.  Vegan tagine: use the same amount (1tbsp) of maple syrup. Nutritional info is based on chickpea tagine served on it’s own. Optional harissa yogurt: Mix 70g / ¼ cup plain Greek yogurt with 1 teaspoon harissa paste and a pinch of salt.