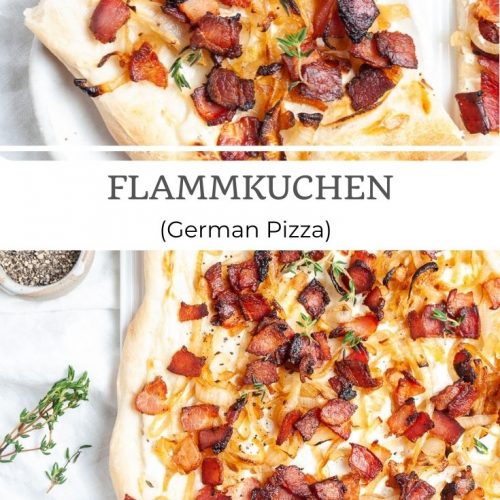 Flammkuchen, with its crispy base topped with creamy yogurt, crisp bacon and caramelised onions, is an easy recipe the family will love. This easy German pizza is both tomato free and a cheeseless pizza too.

Also known as Tarte Flambee or Flammekueche, this pizza is a speciality of Alsace, France, and Southern Germany.

Flammkuchen (pronounced Flamm-KOOK-en) is a thin rectangular crispy pizza topped with bacon and caramelised onions. Translated as ‘flame cake’ or ‘cake in flames’, Flammkuchen was originally made by bakers to test that their oven was hot enough: they took a small bit of dough, topped it with creme fraiche and baked it – the length of time it took to cook told them the oven temperature.

The first time I was introduced to Flammenkuchen as it is also called (yes, it has many names!), was in Munich at a Christmas market. Amongst the stalls selling gluh wein (mulled wine) and Gebrannte Mandeln (cinnamon almonds), was a pizza oven on wheels, and from this a couple were selling rectangles of this German pizza to a long queue of people lined up waiting to buy their pizza. The crispy base and white cheeseless topping of the rectangular pizza was different to any pizza I had tried before, and I was instantly taken!

How to make this recipe

Cook bacon until just crispy then in the same pan cook the onions until soft and caramelised.

The pizza tastes best the day it is made, but you can also keep leftovers in the fridge for up to 2 days.

More Easy Family Dinner Recipes for you to try

Pizza base: you can use bought pizza dough or base if you prefer.  Greek yogurt – You can use the same amount of creme fraiche which is traditionally used. I like to substitute Greek yogurt as not only is it cheaper, but I often have it in the fridge, and it’s readily available everywhere. Onions – white onions are slowly cooked to caramalize and release their sweetness. Take the time to do this as it adds to the flavour of the pizza! You can also use red onions if you prefer. Bacon – Smoked bacon is cooked until just crisp before adding to the pizza – this ensures it is cooked through. You can sub unsmoked bacon. Nutmeg – I use ground nutmeg in this recipe, but you could also use freshly grated if you prefer. For a substitution for nutmeg, use ground mace or garam masala.