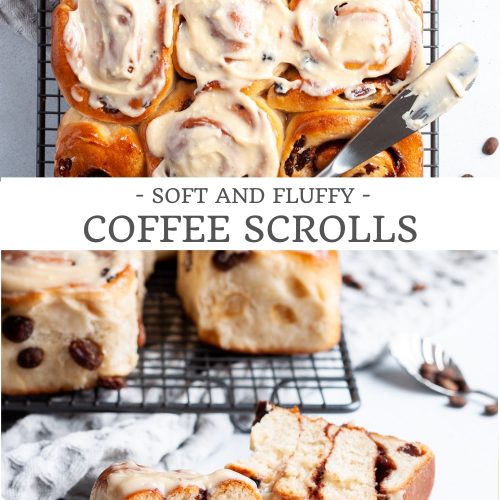 Made from a sultana studded soft yeast dough swirled with cinnamon sugar and topped with coffee icing, these Australian coffee scrolls are a delicious tea time treat, and tasty for brunch too!

What are coffee scrolls?

Similar to a cinnamon roll or Chelsea bun, coffee scrolls are a traditional Australian bakery treat. They can be both savoury, like these pizza scrolls or sweet like this sweet scrolls recipe, with it’s fluffy sultana dough, syrup glaze and coffee icing topping.

Don’t be put off by the long list of ingredients, they are simple to make!

How to make scrolls from scratch

(For full, detailed recipe, please see recipe card below. These images are to help you.)

Can I make scrolls in a breadmaker?

Yes you can. Place all the dough ingredients in the breadmaker and select the program to knead and rise. Once risen, add the sultanas and mix in by hand, then shape by hand and bake in the oven.

Can you freeze cooked scrolls?

Yes you can. Make the scrolls and bake, then leave to cool without adding the glaze. Once cooled completely, freeze (un-iced!) for up to 2 months. Defrost, then heat in for 10 – 15 minutes in a preheated oven at 180˚C/350˚F.

Can I use freshly brewed coffee in the icing?

No. Instant coffee powder/granules provide a good coffee flavour without the need for much water. If you were to use fresh coffee, it would make the icing too liquid.

Nothing beats these freshly made, on their own! But they also make a delicious brunch dish with some fresh berries on the side.

These homemade scrolls are best eaten on the day they are made. They can however be kept in the fridge up to 24 hours. A delicious way of reheating htem (un-iced) is to place them under the grill for a couple of minutes. They make a very tasty breakfast treat!

The coffee icing is what makes these scrolls, well, coffee scrolls. However, it is not always popular with younger family members and those who don’t like coffee. Make a batch of the cream cheese icing, and place half in another bowl. Measure out half the amount of coffee and boiling water. Add this coffee mixture to one bowl and leave the other as is. Ice half the cinnamon fruit scrolls with the vanilla icing and half with the coffee – or 4 scrolls with one icing and 5 scrolls with the other icing.

Other easy baking recipes for you

To make the glaze – optional step

To make the coffee icing

Making scrolls in a bread maker:

Cream cheese – make sure your cream cheese is at room temperature before you make the icing. This will make it easier to mix. Full fat cream cheese is best for this icing. Butter – For the dough, it doesn’t matter if the butter is chilled, but for the filling and icing it needs to be at room temperature (the easiest way to do this is to leave it out from when you start making the scroll dough – by the time you need to fill and then ice the dough the butter will be softened.) Coffee granules – Instant coffee granules, the amount varies by how strong you want the coffee taste to be. A little goes a long way! If the milk and butter mixture begins to boil, let it cool for 3-4 minutes before adding to the flour and yeast. To tell when the scrolls are cooked, tap them – they should sound hollow. Brush with the glaze when the scrolls are still warm… Ice the scrolls when completely cold. Vanilla cream cheese icing: The coffee icing is not always popular with younger family members, but they needn’t miss out! Make a batch of the cream cheese icing, and place half in another bowl. Measure out half the amount of coffee and boiling water. Add this coffee mixture to one bowl and leave the other as is. Ice half the cinnamon fruit scrolls with the vanilla icing and half with the coffee – or 4 scrolls with one icing and 5 scrolls with the other icing. Sift the icing sugar into the icing, to prevent the icing from becoming lumpy. Wait a couple of minutes before adding the boiling water-coffee to the icing, if the coffee is too hot it can melt the cream cheese and butter. The glaze is purely optional. The scrolls are still sweet, sticky and delicious without it!