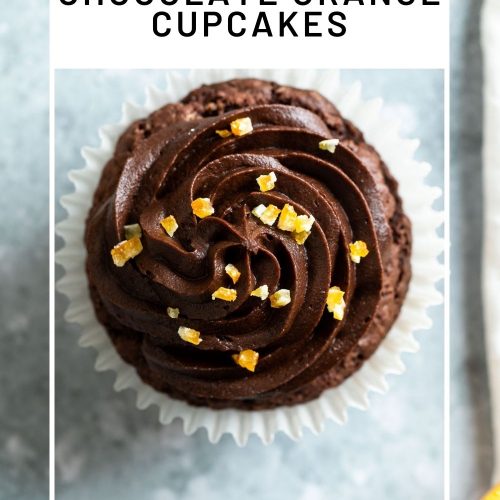 These easy chocolate orange cupcakes topped with a chocolate orange buttercream are a simple but stunning bake for afternoon tea, bake sales and kids parties! This is a small batch recipe that you can easily double (which, the rate they get eaten in our house, you are going to want to do!)

How to make this recipe

Why are cupcakes called cupcakes?

Cupcakes were originally small cakes baked in ramekins or small pottery cups and the name comes from this.

Is chocolate orange a British thing?

Terry’s chocolate orange was created by a British confectionary company, Terry’s in the 1930s. Despite now being manufactured abroad – currently France although it was produced in Eastern Europe before that – it has bred a selection of sweet treats, from cakes to tarts, with chocolate orange flavour combination. I haven’t noticed it to have such a popularity outside the Commonwealth countries.

Do I have to ice cupcakes?

No, you don’t have to ice cupcakes! These orange and chocolate cupcakes taste delicious without any icing. Instead you can dust them with icing sugar, or a drizzle of melted chocolate if you wish, or leave them plain.

How full should I fill cupcake liners?

Fill the cupcake liners ⅔ full, to allow for the cupcakes to rise when cooking.

These cupcakes are best stored in an airtight container at room temperature and eaten in 2 days. After this time they will begin to dry out. Do not store the iced cupcakes in the fridge as they will dry out. You can freeze the cupcakes un-iced for up to 2 months. Defrost before you ice them.

Unsurprisingly, our family loves chocolate! Here are some of our favourite chocolate recipes:

Smaller amount of chocolate buttercream / frosting – for if you want to spread the buttercream on your cupcakes rather than piping the buttercream, or if you just want less buttercream! Use these measurements for a smaller amount of buttercream: Butter – I recommend using unsalted butter than adding a pinch of salt. Use softened butter. If the butter isn’t at room temperature it will be harder to beat. Sugar – granulated white sugar. Flour – plain flour / AP flour Cocoa powder – good quality cocoa powder will pack more of a rich chocolate flavour in to your cupcakes and chocolate buttercream. Orange – Orange zest and orange juice flavours the sponge, and orange juice adds orange flavour to the buttercream. I recommend making these cupcakes without orange extract. You get so much lovely flavour from fresh orange. Icing sugar – confectioners sugar. Pure icing sugar rather than soft icing mixture. Preheat your oven. Do not over-mix the batter – gently fold though the flour, baking powder and cocoa powder. Wait until the cupcakes are completely cold before you ice them.